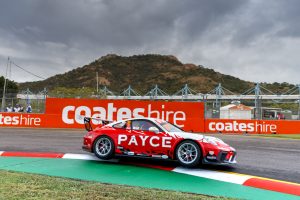 Born on the 911 production line in Stuttgart, the second-generation 991-series 911 race car was introduced to the series in 2018, offering improved performance and safety over its predecessor. Its impact drew huge interest globally with healthy fields and intense competition featuring across all classes. This too was evident in Australia where the breadth and quality of competition set the standard for one-make competition throughout the 2018 and 2019 seasons.

Carrera Cup will be more visible than ever in 2020 with every race live, in HD and ad break free on Fox Sports and Kayo Sports. The 2020 season will also see free-to-air live coverage and replays on Channel 10 increasing to record levels, delivering a world class broadcast package.

As the championship is owned and operated by Porsche Cars Australia, the brand ensures Carrera Cup is run at the highest standard by Porsche’s in-house motorsport team.

Full fields, tremendous racing cars and some of Australia’s best Pro and Pro-Am sports car drivers… Be sure to follow the Porsche Carrera Cup Australia championship in 2020.